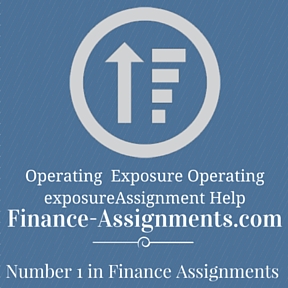 flows. Clearly, operating  exposure-has a longer-term perspective. Given the fact that the firm is valued’~s a going concern entity, its future’ revenues and  sots are likely to be affected by the exchange rate changes. In particular, it is true  . for all those business firms that deal in selling  goods and services that are subject to foreign competition and/or uses inputs from abroad. . In ease, the firm succeeds in passing  n the impact of higher ‘input costs (caused due to appreciation of foreign currency) fully by increasing the selling price: it does   OT  ave any operating risk exposure as its operating future cash flows are likely to remain unaffected. The less price elastic is the   amend of the goods services the firm deals in, the greater is the price flexibility . it has to respond to exchange rate changes. Price  elasticity in tum depends, inter alias, on the ‘degree of competition and location of the’ key competitors. The more .differentiated a   um’s products are, the less competition it encounters and the greater is its ability Io maintain its domestic currency prices, both at   one and abroad”, Evidently, such Finns have relatively less operating risk exposure. In contrast, Finns that sell goods services in     highly competitive market (in technical terms; have higher price elasticity of demand) run a higher operating risk exposure as they are constrained to pass on the impact of higher input costs (due to change in exchange rates) to the consumers. .  Apart  ROM supply and demand elasticizes, the firm’s ability to shift production and sourcing of inputs is another major factor affecting  operating risk exposure. In operational terms, a firm having  nigher elasticity of substitution between home-country and foreign- country inputs or production is less susceptible to foreign exchange risk and hence encounters low operating risk exposure.· . In   brief, the firm’s ability to adjust its cost structure ‘and raise the. prices’-of its products and services is the major-determinant of its  prating risk exposure.