ANALYSIS OF RISK AND UNCERTAINTY

Simulation is a statistical technique employed to have an insight into risk in a capital budgeting decisions, This technique applies predetermined probability distributions and random numbers to estimate risky outcomes.

To be effective, simulation requires a sophisticated computing package as it then enables to try out a large number of outcomes with much ease.

‘The first step in any simulation exercise is to develop the precise model of the investment project to be used by the computer. Once the model is developed, the computer calculates a random value of project returns (say, in terms of NPV) for each variable identified for the model. From each set/iteration/run of random values (consisting of all the variables listed in the model), a new series of cash flows (cash inflows and cash outflows) is generated and so also of NPV. The important variables in any typical capital budgeting project (most often used in the model) are market size and its growth rate, market share the proposed project is likely to capture, sales price, unit variable cost, total fixed costs, salvage value of the asset, economic useful life span of the project, cost of capital, working capital requirement, tax rate and so on.

This process of generating a random set of values is repeated numerous times (perhaps as many as a thousand times or even more for very large and complex investment projects). This iteration exercise enables the decision maker to develop a probability distribution of the net present value of the proposed investment project, this probability distribution is then used to compute the project’s expected mean value of NPV and its standard deviation. The value of standard deviation then can be used to assess the level of risk associated with the project.

It is evident from the above that the probability distribution so developed (through the simulation process) is not only more credible, but it also enables the decision maker/finance manager to view a continuum of possible outcomes rather than a single point estimate.

Let us assume that the marketing department of Hypothetical Ltd has developed the following two tables (one for sale price and another for sales volume) for its new product, containing probability and assigned random numbers. 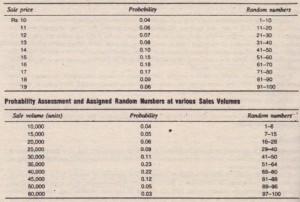 On the first run of a model, the computer will generate two numbers-one for sale price and another for sales volume. Suppose, the random numbers generated are Rs 15 (price) and 30, (volume). Based on these two numbers, the total sales value for the model will be Rs 4,50, (Rs 15 x 30,000 units), This value is to be placed with all other key variables (say, unit variable cost and fixed costs) to generate the first set of NPV. The data for all the other key variables will be also in the form of a table containing probability assessment and assigned random numbers. As earlier, this process will be repeated many times to develop probability distribution expected NPVs. From the distribution so generated, mean and standard deviation values can determined.

However, simulation suffers from certain limitations that render this technique inappropriate/indefeasible to be used to assess risk profile of a capital budgeting proposal in real life situations. Fact, the model often becomes so complex (and so quickly) that the decision maker loses int and finds it difficult to go along with the model.

The other problem associated with using simulation is that probability assessments of the variables (required for model) are most often subjective and difficult to estimate in practice example probability values assigned to sale price and sales volume are subjective in nature. Finally, the simulation exercise is both costly and time consuming. Therefore, this exercise has restricted application in that it is likely to be used only in analyzing very complex and large investment projects, involving substantial funds.