ANALYSIS OF RISK AND UNCERTAINTY

The normal probability distribution as shown in Fig.  has a number of useful properties.

The area under the normal curve, representing the normal probability distribution, is equal to 1 (0.5 on either side of the mean). The curve has its maximum height at its expected value (mean). The distribution (curve) theoretically runs from minus infinity to plus infinity. The probability of occurrence beyond 3o, is very near zero (0.26 per cent) ..

SOLUTION (i) Zero or Less:

The first step is to determine the difference between the expected outcome X and the expected net present value X. The second step is to standardize the difference (as obtained in the first step) by the standard deviation of the possible net present values. Then, the resultant quotient is to be seen in statistical tables of the area under the normal curve. Such a table (Table) is given at the end of the book. The table contains values for various standard normal distribution functions. Z is the value which we obtain through the first two steps. That is: 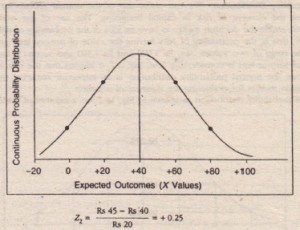