The mixed cost, are composed of both fixed and variable elements. The fixed part of represents a cost of capacity, while the variable elements is influenced by change in activity. For budgeting purposes, mixed costs must be broken down into their fixed amount of fixed costs and the proportion to to total changes in output/volume can be worked out. That is, the fixed costs remain constant regardless of activity, but the variable portion is assumed to change in direct proportion to change labor hours, labor costs, machine hours, material costs, material quantity, and so on.

The main element in the construction of a flexible budget have been outlined above. To summaries, a flexible budget in series of fixed budget and an increase or decrease (any change) in the level/volume of activity must be reflected in it. Each expense in each department/segment is to be categories into fixed, variable and mixed components. A budget may be prepared at the expected level of 100 per cent of capacity. Additional columns may then be added for costs below and above 100 per cent, say, 90 per cent and 110 per cent. 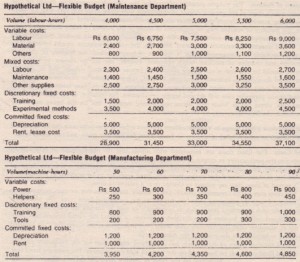