The ratios discussed so far measure a firm’s liquidity, solvency, efficiency of operations and profitability independent of one mother. However, there exists interrelationship among these ratios. This aspect is brought out by integrated analysis of ratios. The dis-aggregation of ratios can reveal certain major economic and financial aspects, which otherwise would have been ignored: For instance, significant changes in profitability measured in terms of return on assets (ROA) and return on equity (ROE) are understood better through an analysis of its components. 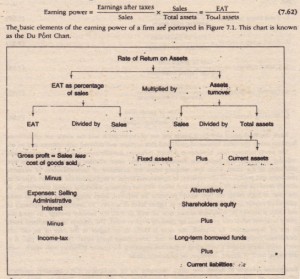 The ROA ratio is a central measure of the overall profitability and operational efficiency of a firm. It shows the interaction of profitability and activity ratios. It implies that the performance of a firm can be improved either by generating more sales volume per rupee of investment or by increasing the profit margin per rupee of sales.