In practice, it may not be possible to determine the minimum overall cost of capital. Therefore, a diagrammatic presentation is useful as it depicts a range over which the cost of capital is minimized. The (k) curve developed in a fairly shallow saucer with a horizontal section over the middle ranges of leverage (0.27 to 0.54). The firm should not go to the left or to the right of the saucer part of the curve.

The traditional view on leverage is commonly referred to as one of  U shaped cost of capital curve. In such a situation, the degree or leverage is optimum at a point at which the rising marginal cost of borrowing is equal to the average overall cost or capital. For this purpose, marginal cost of a unit of debt capital consist of two parts: (i) the increase in total interest payable on debt: (ii) the amount of extra net earnings required to restore the value of equity component to what it would have been under the pre-existing capitalization rate before the debt is increased. 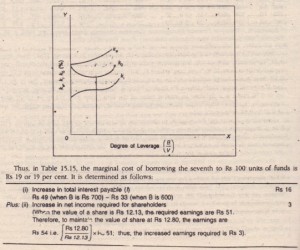 Since the marginal cost of debt is 19 per cent, while the over all cost of capital is 9 per cent, the of more debt at this stage is imprudent. In other words, a mix of debt of Rs 600 with equity of Rs 400 provides the optimum combination of debt and equity and optimum capital structure.

Thus, according so the traditional approach, the cost of capital of a firm as also its valuation is dent upon the capital structure of the firm and there is an optimum capital structure in which the firm’s ko is minimum and its (V) the maximum.