It can be seed from the assumptions of Gordon’s model that they are similar to those of Walters model. As a result, Gordon’s model, like Walter’s, contends that dividend policy of the firm is relevant and that investors put a positive premium on current incomes dividends. The crux of Gordon’s arguments is a two fold assumption: (i) investors are risk averse, and (ii) they put a premium on a certain return and discount penalise returns.

The above argument underlying Gordon’s model of dividend relevance is also described as bird in the-band. That a bird in hand is better than two in the bush is based on the logic that is available at present is preferable to be available in the future. Basic his model on this argument, Gordon argues that the future is uncertain and the more distant future is, the more uncertain it is likely to be. If, therefore, current dividends are with bled to profits, whether the investors would at all receive them later is uncertain. Investors would nature like to avoid uncertainty. In fad, they would be inclined to pay a higher price for shares on which current dividends are  paid. Conversely, they should discount the value of shares of a firm as dividends. The discount rate would vary, as shown in Figure, with the retentive rate or level of retained earnings. The term retention ratio means the percentage of earning retained. It is the inverse of D/P ratio. The omission of dividends, or payment of low divide would lower the value of the shares. 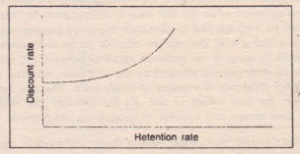